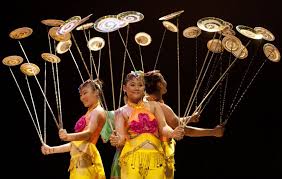 The acrobats developed their styles based on traditional ancient arts such as dance, theater, martial arts, and magic shows. Their acrobatics is distinctive and incorporates traditional skills and physical exercises. In general, there are two styles of Chinese acrobatics: martial arts style and circus style.

Circus style shows: They are more like Western acrobatics shows. The individual performers and groups of acrobats do amazing acts of balancing, juggling, and gymnastics, and they are often amusing.

Buy To This Event Directions